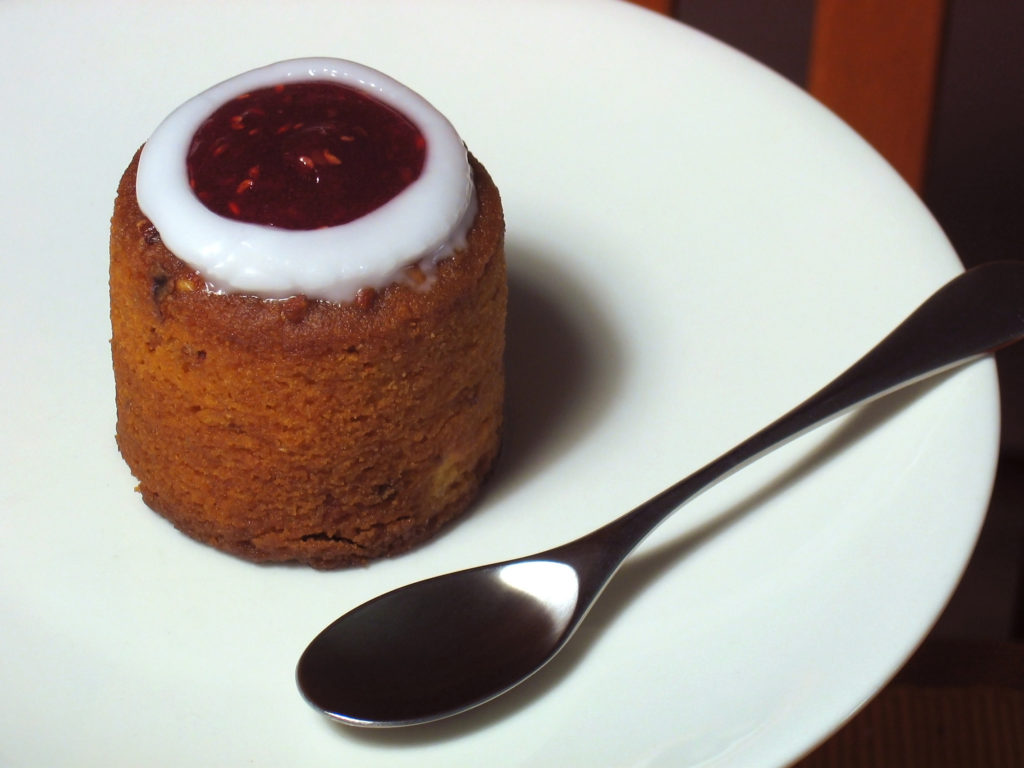 a teaspoon of ground cardamom

Bring the oven to 125 degrees. Defrost and cool the butter. Mix the baking powder with the wheat flour. Mix the flour with almond crumbs, breadcrumbs, gingerbread crumbs and cardamom. Whisk the egg and sugar to a froth and add the cream, melted butter and dry ingredients. Finally, add a couple of drops of bitter almond oil.

Spoon the dough into the bottom of either the silicone pans or paper pans and onto it, in the middle of the raspberry jam. Add the dough over the jam so that the pan is just over halfway through. First bake for a few minutes in a 125 degree oven and then raise the heat to 200 degrees. Bake with everything for about 20 minutes until the tarts are beautifully browned.

After the cakes have cooled, remove them from the silicone holes (paper ones can be left in the cakes). Moisten the cakes a little with a punch or almond liqueur (in families with children with sugar water). Make icing from icing sugar and a drop of water and extrude it into a ring on top of the tart. Fill the middle with raspberry jam. Serve with coffee and / or punch.

This event will now be held only in Zoom, the face-to-face event at the Metsä Pavilion is cancelled.

Join us online to listen to the prominent guest speakers from Finland and Japan!

Attention!
The Finnish architecture seminar will only be held online in Zoom (in contrast to the previous information) because of the temporary closure of the Metsä Pavilion until the end of this year.

Online participation in Zoom via the link https://us02web.zoom.us/j/82314607795?pwd=eERaTGtHRmRkZ1dCUTV4d1NyRldLUT09 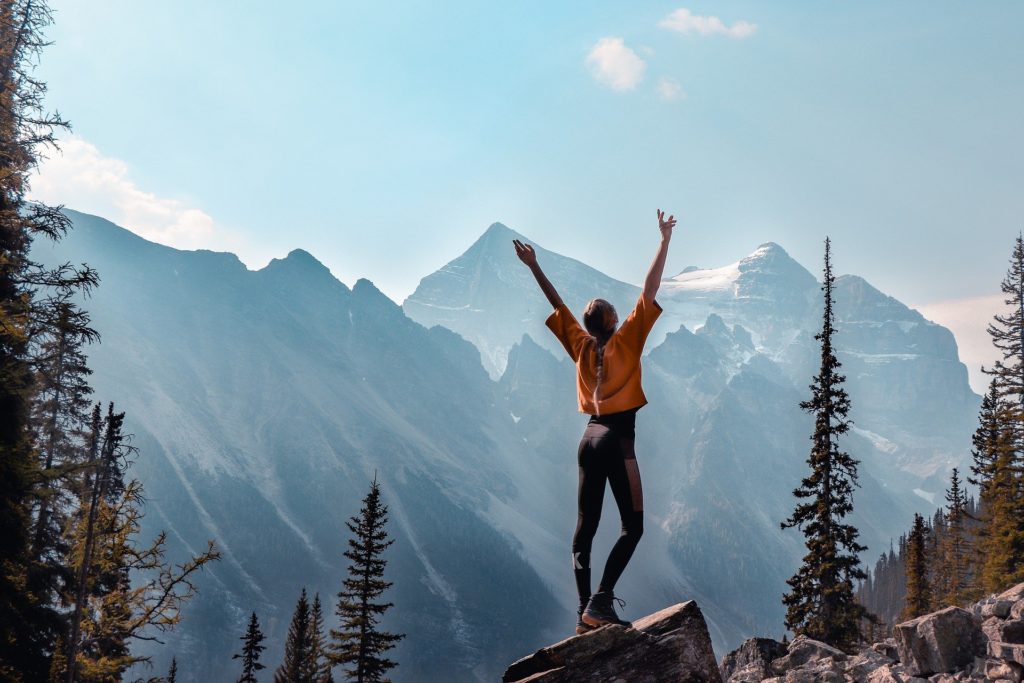 Women: Stop dreaming – start acting!
Empowering women to take charge of their lives!
Happy woman feels that her life is meaningful when it comes to her family situation, her work, her leisure time and above all, herself! Happy women are happy at home, happy at work and happy with their friends. The happiness is then spread within the circle of one’s friends, family members, co-workers, companies and finally in the society. But how can women be empowered?
The Finnish Institute in Japan organizes an international conference about Women’s empowerment with prominent speakers for example members of academia, entrepreneurs and innovators from Japan and Finland share their story! Come and join and be empowered!

Programme:
9:45 We will open the gate and the doors to the Metsä Pavilion
9:55  We will open the Zoom for our speakers from Finland and to check that everything is in order.
10:00 Opening words by Anna-Maria Wiljanen, Director of FIJ
10:30 Keynote speech by Chancellor Mariko Bando, Chancellor, Showa Women’s University
“We must create a new type of leadership; a leader who will support, share with, and be dedicated to others for a sustainable society”
11:30 Lunch (bento boxes will be served all the speakers and the audience at the Metsä Pavilion)
12:15 Discussion about women’s empowerment by Hiroko Sakomura, S2 Corporation Ltd, and Anna-Maria Wiljanen
13:15 Speech by Arisa Ido
14:15 Speech by Moriko Hori, President of Women’s Federation for World Peace, Japan
15:15 Coffee break
15:45 Speech by Daniela Yrjö-Koskinen, Managing Director and Owner, Novita Oy
16:45 Speech by Anna-Maria Wiljanen, Director of the Finnish Institute in Japan
17:45 Speech by Tamako Takamatsu
18:45 Closing remarks by Anna-Maria Wiljanen
18:50 Network reception starts
20:00 Doors close 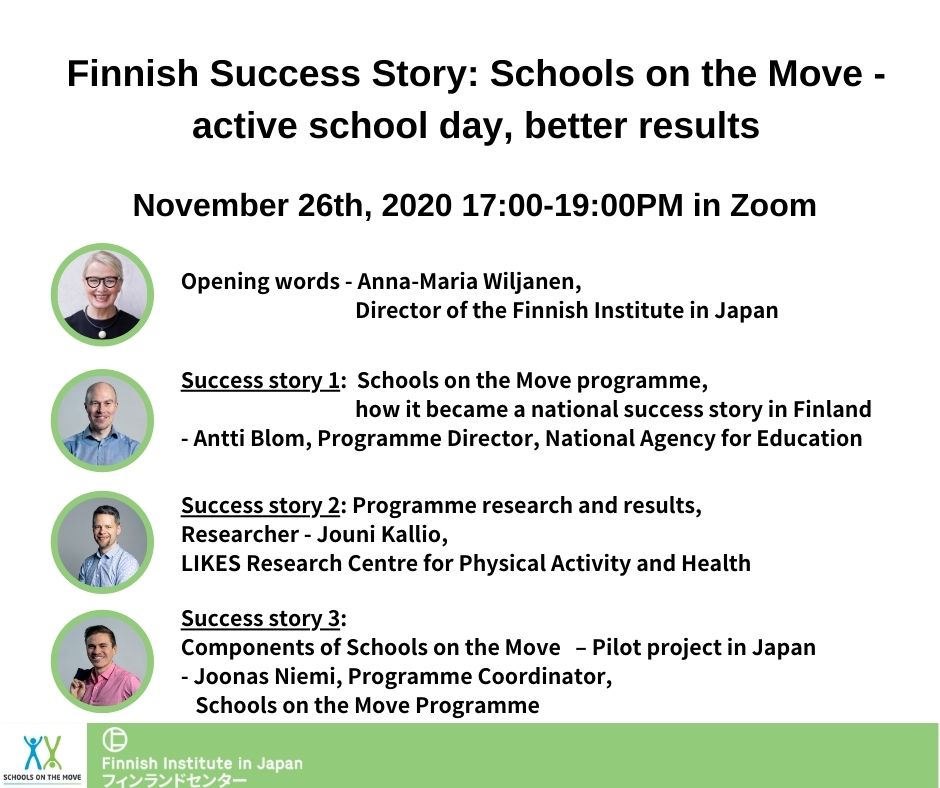 What to learn more about the revolutionary new Finnish programme for the schools? How the increase in physical activity during the school day will give better learning results? Schools on the Move is a research-based programme for promoting physical activity in schools. It was developed in 2010 and has grown from a pilot project into a project that today covers more than 90 percent of Finnish schools in basic education.
Finnish Institute in Japan is collaborating with LIKES Research Centre for Physical Activity and Health in Finland with the pilot project in Japan.

How can we get rid of fast fashion and single-use culture? What are the sustainable materials and their quality? How about the production process and costs?

The Finnish Institute in Japan organizes a Sustainable materials seminar November 24th at the brand new Metsä Pavilion! Prominent researchers and designers from Finland and Japan will speak about the latest product innovations! Join us in hearing and discussing more natural, energy efficient and ecological solutions on what to wear tomorrow.
Programme:
November 24th, 2020, at 14:30-20:00PM (Including Reception)

This seminar is a hybrid event taking place in the Metsä Pavilion (max. 50 attendees) and in Zoom: https://us02web.zoom.us/j/83750038820?pwd=RjVjcmFDTGJsdFp4d2JzTUUrZGFqZz09

Heli Blåfield documents Finnish modern-day sauna culture, and through it, Finnish everyday life and its rituals. Heli toured all 19 provinces of Finland from May 2017 to December 2018. Together with her brother, writer Ville Blåfield, they published a series of photo reportages, that eventually formed a book published early 2019 (Saunavuoro, Teos). The siblings travelled 10,390 kilometres by car, 2,200 kilometres by air and 318 kilometres by ferry, for a total of 12,908 kilometres. Along the way, they met over 100 new sauna companions.

“The tour took us to public and private saunas, together with families, groups of friends, and colleagues. We saw a lot of lacquered birch panel, Crocs sandals, and plastic carpets. But at the same time we saw a lot of beauty – a lot of Finnishness. For a Finn, sauna is not only a dark booth, it’s also a window. We realised that above and after all sauna is the great connecting factor in our culture.”

There are over 3 million saunas in Finland – a country of 5 million people. According to official statistics, clear majority of Finnish saunas – 1,686,154 of them to be exact – are located in private homes. The second largest group, at 797,845, are found in Finland’s summer cottages. As the categories grow smaller, it is easy to gain a sense of the unique diversity of Finland’s sauna stock. Some 9,896 saunas can be found in various farm buildings, 6,468 saunas in business premises or industrial buildings, and 4,000-or-so saunas have been built onto trailers.

Whatever the real number, the statistics don’t lie: you can find a sauna in pretty much every corner of Finland. It is an integral part of most every living arrangement, weekly routine and social interaction.

The exhibition was created with support from Patricia Seppälä Foundation and The Finnish Sauna Society.

Entrance is free but needs to be reserved in advance, reservations can be made until 16:00 the day before.

Please choose your desired day here and complete the registration process on Peatix via the below links:

Thursday 3.12.: Open only for the participants of the women’s empowerment seminar

The week ends with the traditional and hugely popular crayfish party!

MONDAY, November 2nd: Welcome to the fascinating world of Anna ja Liisa Designs and meet the designers behind the beautiful designs that  are inspired by nature in all its details, the wide open landscapes which brings peace of mind just by looking at it.! In this hybrid event designers Elina Rebers, Johanna Högväg and Tanja Krokvik will tell the story of Anna ja Liisa
designs, about their sources of inspiration and their future! Sachiko Imaizumi will tell about her role when introducing Annajaliisa to Japan! Come and join us at the Metsä Pavilion or in Zoom!

TUESDAY, November 3rd: Meet the young and successful Finnish Swedish entrepreneur Robin Borgström who started a company Pals together with his friend Sebastian Molesly when their were only 16 years old! Today their business is flourishing!
Join us in Zoom for a talk with Robin Borgström about how to succeed and his tips to all who want to become an entrepreneur!

WEDNESDAY, November 4th: The soul landscape of the Finnish Swedish author Marianne Backlén! She will tell about her books, her writing process and about her love to Japan!

THURSDAY, November 5th: Introducing the traditional songs that will be sung at the Crayfish party! Join the hilarious sing lesson in Zoom! 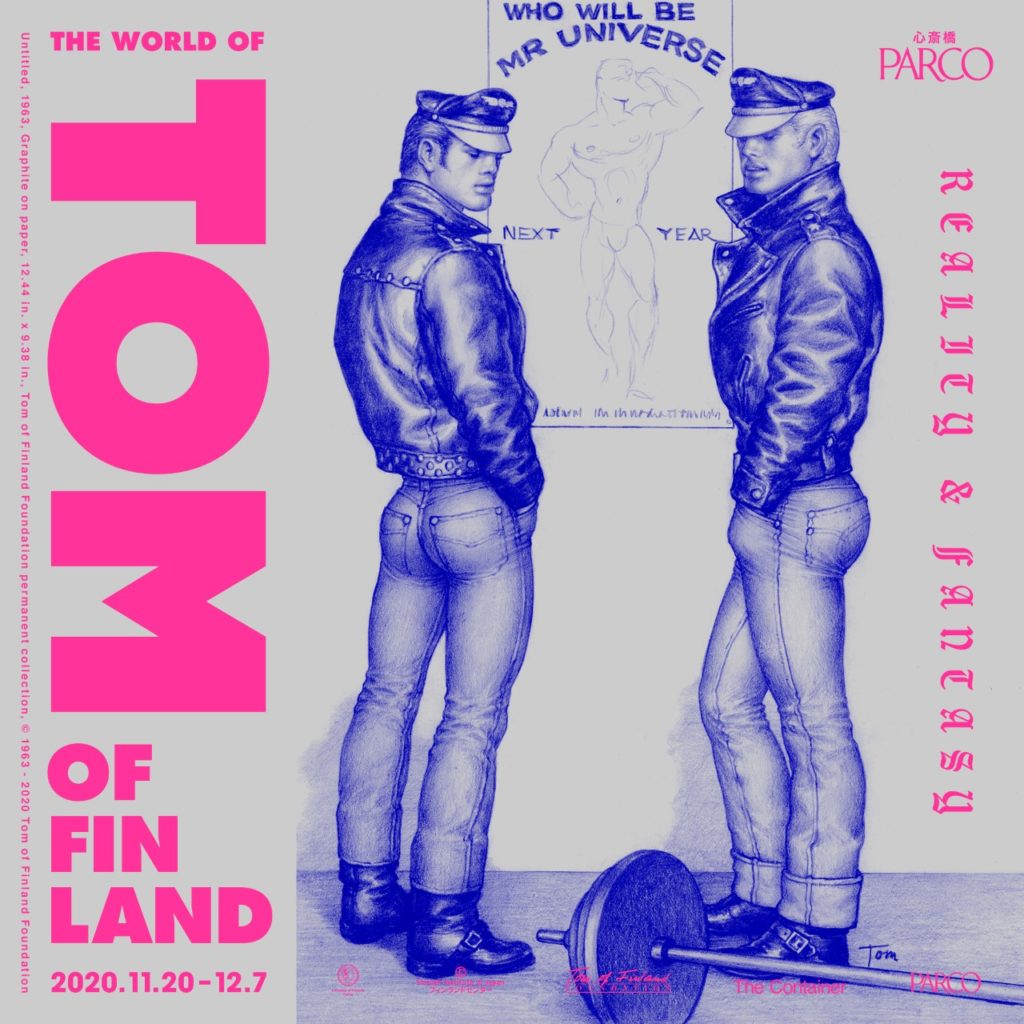 After its debut in Tokyo, the first ever Tom of Finland exhibition in Japan continues to Osaka, where it will be on display in Parco Shinsaibashi from November 20th to December 7th. The exhibition features a selection of 30 historical works, ranging from 1946 to 1989, covering the artist’s entire professional career, and highlighting both his artistic versatility and presenting his identity as an LGBTQ legend who paved the way for LGBTQ rights worldwide and helped to shape gay culture. 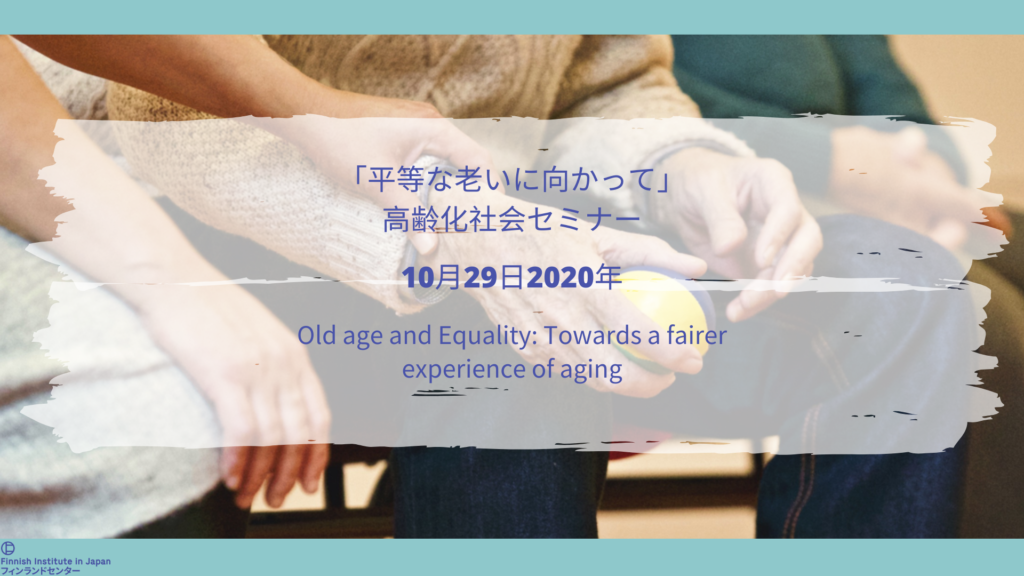 Thanks to everyone who participated! The lecture slides are available here.

“Old age and equality: towards a fairer experience of aging” seminar day will be held in the newly built Metsä Pavilion on the grounds of the Finnish Embassy in Japan. The event will run from 13:00 to 18:00 on 29th of October.

Japan is the first nation considered to be a “super-ageing society”, while Finland is one of the fastest ageing countries in Europe. Despite the geographical distance and cultural differences, the two countries face very similar challenges in the coming decades: how to maintain the quality of life in a society where the old outnumber the young? How to respond to the needs of a diverse elderly population? How to create care policy capable of assessing and fulfilling everyone’s needs regardless of societal standing?

The aim of the conference is to share Finnish and Japanese perspectives and approaches to the issues of ageing with a focus on equality and poverty in old age. The talks will address not only the problems, but also the success stories and emerging solutions that can benefit both countries.

Registration:
Kindly register via Peatix to the face-to-face event in the Metsä Pavilion 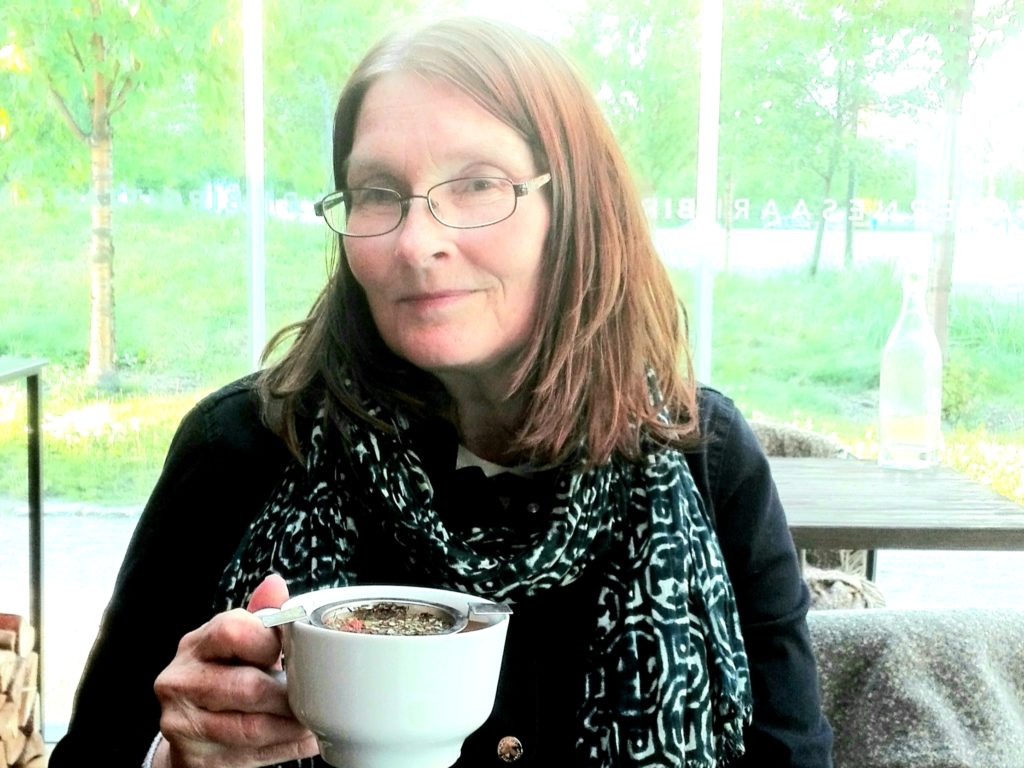 The European Literature Festival will be mainly on-line this year. The Finnish representative is Marianne Backlén, who will introduce an exclusive extract from her upcoming novel Diamantvägen to the Japanese audience on Thursday November 26th 18:45–19:30.