Finnish author Sami Hilvo will take part in the European Literature Festival 2021.
He will have an online talk event on November 25th, 2021 at 18:00 in Japanese.
An excerpt of his latest novel Species-typical Behaviour (2020) can be read on the festival website.
For more information, please visit https://eulitfest.jp/. 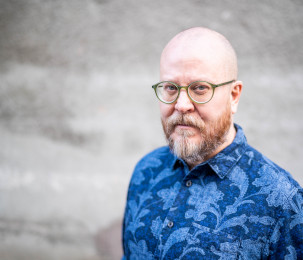 Sami Hilvo (b. 1967) is a Finnish author, translator and interpreter. Questioning and new perspectives are at the heart of his literature.

Hilvo’s first novel Viinakortti (The Liquor Ration Card) was published in 2010 and got nominated for the Helsingin Sanomat Literature Prize. It was translated into German in 2012, and a play based on the novel got its Finnish premiere in 2013.
His second novel Rouva S. (Madame S.) came out in 2012 and takes place in the 21st century Tokyo as well as in Kyoto a thousand years ago. It was nominated for the Tulenkantaja Literature Prize.
Hilvo’s third novel Pyhä peto (Holy Beast) won the Tampere City Literary Award in 2016.
His fourth novel, Lajityypillistä käyttäytymistä (Species-typical Behaviour) was published in 2020.

Hilvo has lived Tokyo and Warsaw, Poland, and now resides in Helsinki. He is currently working on his fifth novel.