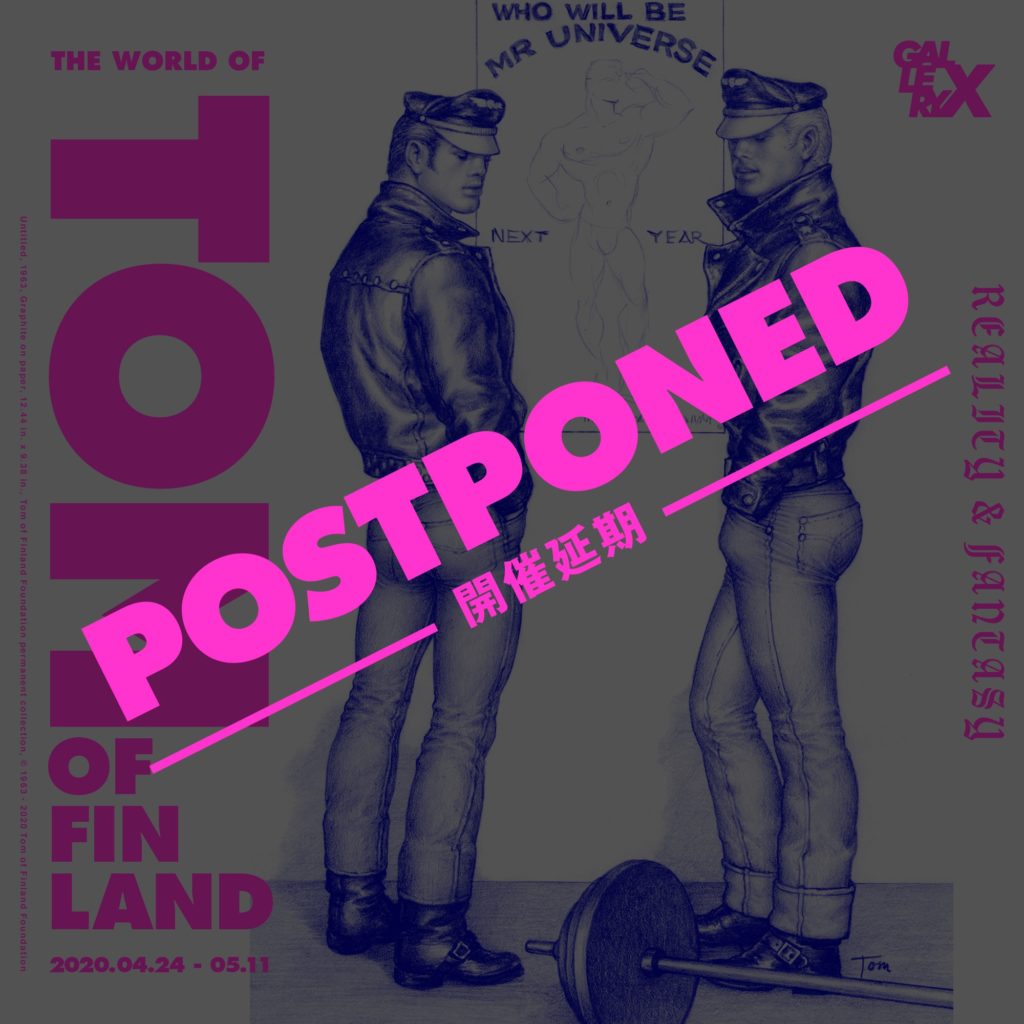 << Following the spread of COVID-19 worldwide, and in accordance with the recommendations of Japan’s Ministry of Health, Labour and Welfare and WHO, we regret to inform you that our upcoming exhibition, “Reality & Fantasy: The World of Tom of Finland”, is postponed.

The exhibition, and the accompanying programs, will take place in full at a new date this year, once the situation improves.

We will keep you updated with any developments.

Many thanks for your support and understanding, and of course, keep safe and healthy. >>

The exhibition features a selection of 30 historical works, ranging from 1946 to 1989, covering the artist’s entire professional career, and highlighting both his artistic versatility and presenting his identity as an LGBTQ legend who paved the way for LGBTQ rights worldwide and helped to shape gay culture.

In 2006, The trustee of The Judith Rothschild Foundation, Harvey S. Shipley Miller, asserted about the Foundation’s gift to the MoMA of five of Tom’s work, “Tom of Finland is one of the five most influential artists of the twentieth century. As an artist he was superb, as an influence he was transcendent.”

Reality & Fantasy: The World of Tom of Finland, brings together a selection of works, covering the artist’s entire four decades of career, and presents works on paper using a variety of mediums, such as graphite, gouache, markers, and pen & ink. Historically, the images highlight milestones and artistic stylistic developments in Tom’s life and practice—starting with his 1940s and ’50s paintings in gouache, of men in stylish attire and uniforms, such as sailors, soldiers and policemen, in fantastic and romantic compositions, influenced by his army service in Finland—to his stylized depictions of leathermen and muscle men in the ’60s and ’70s, and the cleaner, high contrast and graphic drawings of his later career when he was working in Los Angeles.

The exhibition also features many works commissioned by the Athletic Model Guild (AMG), founded and headed by Bob Mizer in 1945. Tom and Bob had a long-time professional relationship. It was Bob that added “of Finland” to Tom’s name as was the fashion of the day. Reality and Fantasy, includes a number of drawings that appeared in AMG’s magazine Physique Pictorial, including two drawings that appeared on the cover of the magazine (Untitled, from the AGM “Men of the Forests of Finland” series, 1957; and Untitled, from the AGM “Motorcycle Thief” series, 1964.)

Award-winning filmmaker Dome Karukoski brings to screen the life and work of one of the most influential and celebrated figures of twentieth century gay culture:

Touko Laaksonen, a decorated officer, returns home after a harrowing and heroic experience serving his country in World War II, but life in Finland during peacetime proves equally distressing. He finds post-war Helsinki rampant with homophobic persecution, and men around him even being pressured to marry women and have children. Touko finds refuge in his liberating art, specialising in homoerotic drawings of muscular men, free of inhabitations. His work – made famous by his signature ‘Tom of Finland’ – became the emblem of a generation of men and fanned the flames of a gay revolution.